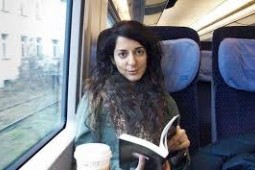 Porochista Khakpour
According to IBNA correspondent quoting from Bookforum, the memoir of Porochista Khakpour ‘Sick’, is a deeply powerful and harrowing odyssey through the most profound mysteries of mind and body, as Khakpour explores the roots of a chronic illness that has no clear beginning or end. Khakpour’s dazzling novels, ‘Sons and Other Flammable Objects’ and ‘The Last Illusion’, in addition to her essays, and ‘Sick’ cements her reputation as one of most vital American writers working today.

Laura van den Berg (BookForum): We’re both novelists and to me the start of a novel feels generated by a collision of several different elements and/or events—some that I can give name to, and some that seem to live just beyond the realm of language. The opening of Sick—“I have never been comfortable in my own body”—is so compelling and I’m curious to know how you arrived at this particular starting point and how the process of finding a place to begin differed from your experience as a novelist?

It was hard to know where to begin. I kept thinking, “When did my disease first hit? When did it begin?’ I wanted to write a slim memoir that was basically a long essay, but I knew in order to be honest I had to go to the beginning. In this case, that meant my whole life. This was a horror to me because it meant writing an autobiography, which is not what I wanted at all. With the novel, you can call the shots and create an aesthetic landscape all your own. In writing a memoir the issue of the truth tortured me. It was truly a bad time—not just the subject but the act of composition!

‘Sick’ is structured around places—New York, Santa Fe, Leipzig—with brief interludes in between. How did this structure take shape? What did you want to explore in terms of the relationship between illness and place?

The interludes also operate as mini-essays that further complicate this narrative by setting—in addition to prologues and epilogues and author notes and all that. It’s a lot of structure for a fairly short book! Maybe this was a mistake. But the chaos of illness and the fact that this story has no real beginning, middle, or end made me seek lots of organizational devices. This is just how I am in real life. I like order. Lots of it. I like meaning and problem solving too, but with illness you are not allowed them, really. I realized setting was a natural place to go because it was who I was—someone who often seeks an outward solution when a problem may actually be inward. Also, as a refugee and immigrant, I have always felt placeless. You have so much psychoanalysis to do as a writer, it always seems.

‘Sick’ is a slim book, but vast in scope. The book details your experience being chronically ill with late-stage Lyme disease, and is also an exploration of exile, addiction, trauma, love, heartbreak, violence, and art. Did you always know that the memoir would require these many complex layers? Did the process of writing bring up unexpected connections and questions?

The process of writing a memoir is truly harrowing and I learned so much about myself that I did not even want to know. Writing an autobiography was therapeutic and traumatic at times, but unlike the novel it continues its therapies and trauma long after I’ve written it. If I did not believe this could be of use to others, I could not have done it at all.

In our conversations about the book, you’ve cited William Styron’s ‘Darkness Visible’ as a model for ‘Sick’. Why was that memoir—apart from being amazing!—such an important model for you?

I love that book so much that I had becomes somewhat unaware of Styron’s other problematic history with race. I never had any reason to care about Styron past ‘Darkness Visible’, but to me that book is perfect in many ways, like a raw diamond. I love how thin it is and how unabashedly honest. For example, Styron named the meds that harmed him. I felt I had to as well. It seems out of vogue to challenge pharmaceuticals by their name, but I thought if Styron could, so could I. I gave myself that permission.

I also love that it is about a writer who breaks down well into his career. I am nowhere near as accomplished as he was, of course, but I felt I didn't want to shy away from the writers’ narrative even though a part of me knows it bores people. That's who I have been since age four. Why not be honest about it? Basically Styron, other than the beautiful writing, inspired me in the direction of permission.