Transparency stressed in Book of the Year Award

Publish Date : Monday 29 January 2018 - 20:38
IBNA- Describing various features of the 35th Iran’s Book of the Year Award, CEO of the Book House Institute Majid Gholami Jaliseh said transparency is stressed in selecting and judging the works in the award contest. 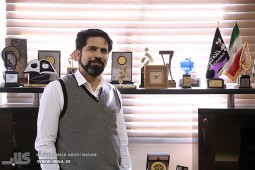 Majid Gholami Jaliseh
In an interview with IBNA, Jaliseh spoke on the amendments made to judgment of the works participating at the 35th Iran’s Book of the Year Award particularly in translation contest saying that in light of the measures adopted by directors and experts of the award, it has been established in terms of programming and implementation and is held effectively.

Referring to a reduction in the number of books received by the Secretariat of the Book of the Year Award and the new call issued for the event, he said that the new situation has contributed to a better evaluation of the released books.

“Now, at first the authors and publishers ask themselves whether their works are qualified to run for the Book of the Year Awards or not. So, they don’t submit all the works they have published. Four years ago we had to evaluate nearly 22,000 first edition books, but during the two or three last years the number has reduced to 7000,” Jaliseh said.

On the other steps taken by Iran’s Book House Institute, he cited scientific and organizational assistance given to provincial, student, musical, theater and religious book festivals and those held for the handicapped, which entirely elevate the level of the Book of the Year Awards.

Elsewhere in his remarks, CEO of Iran’s Book House Institute pointed to the online judgment of the Book of the Year Award: “It began since three years ago and is another process initiated by us to improve the quality of the awards. On this basis, the works are sent to the members of the jury panel and the results are sent to the secretariat of the award in an online process. Using such initiative enabled us to take the best advantage of the expertise of our judges.”

“In other words, the procedure of judging the books is not limited to the viewpoints of our capital-based jury members, and jurors from other cities such as Tabriz, Bushehr, Mashhad and so on cooperate with the book house Institute and exchange their ideas with us. More than 1000 experts across the country are cooperating with us in this plan,” he added.

Jaliseh then referred to the problem caused by some Iranian publishers of books for children and young adults, which are mass producing these works and have monopolized the market: “The result is a drop in the number of authored books and an awkward influx of the translated books into Persian which have dominated the market.”

The support given to the top works of the Book of the Year Award was another issue raised by him in the interview: “Introducing these books, holding celebrations of signing books by the authors and purchasing the top books by the Deputy Culture Ministry are among the methods adopted to back the writers, translators and publishers. But more efforts should be made by the other related organizations, but unfortunately, they are not made. However, we in our part try to play our supportive role as good as possible.”

CEO of Iran’s Book House Institute also criticized the inadequate contribution of universities publications to produce and release notable and significant books: “Earlier, the press institutes affiliated to our universities released the best specialized works, but currently they are mostly involved in producing under standard books. It seems that they lack a coherent stable plan for publishing worthy academic books.”