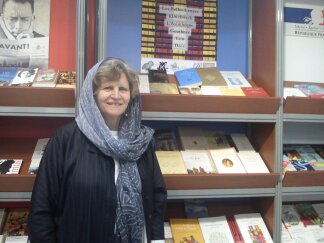 In an interview, Marie-Jose d’Hoop told us that Les Belle Lettre Publishing House is a very old printing centers founded in 1919 and it is specialized in classical studies, Greek and Latin studies as well as the old classical studies until the Renaissance.
“Some university professors in the German prisons during the World War I said that if they came out of prison, they would found a publishing house specialized in classical studies. They founded Les Belle Lettre after the war and the first books on Greek and Latin were published in 1919 and 1920,” she noted.
Regarding the publishing conditions in France, d’Hoop held that Literature and humanities and social sciences have very different publishing problems. “Writings on humanities published in France were very strong until twenty years ago but now it is very difficult because children and school boys as well as school girls don’t want to learn Greek and Latin. It is rather a difficult situation but we are still living and it is still good,” said Dope, also the founder of Bibliotheque chinoise project in France.
Regarding her purposes in Iran, she maintained: “We are specialized in Greek and Latin along with old Chinese and we wish to develop intellectual cooperation with Iranian professors to publish ancient Persian texts as well. But it is just a project and we have nothing in mind, we have just come here and see things first”.
About the impact of digital books on publishing paper books in France, d’Hoop said that “Until now digital books have had low impact but the problem is not digital publishing but the problem is that children don’t read paper books since they read on IPhone and IPad, websites and computers”.
Students don’t have time to read; they are always on the Internet and social networks and they have no time for reading books and nobody can predict the future, according to d’Hoop.
“Many publication institutes publish at the same time paper books and digital books but for Greek and Latin, it is impossible since it is not possible to digitalize the Greek characters; however, for we digitalize many books but we don’t sell them and until now it hasn’t been a good market for us,” she held.
About the agreement between the publisher and the writer, she said: “We have different contracts for publishing the books on humanities and literature. For the humanities, the authors are mostly university professors and researchers and they are not in the same category.
Regarding the role of women in French print industry, the representative of Les Belle Lettre Publishing House maintained that there are many women who are publishers and authors and that they have their own publishing houses and are totally free in their profession.