Iranian culture is a culture of moderation

Publish Date : Monday 11 May 2015 - 14:56
IBNA- The Italian professor of the ancient history of Iran at the University of Rome Carlo Cereti said that the ancient Iran represented the synthesis between the ancient Asia and the Mediterranean Sea. 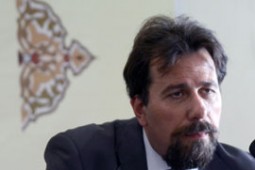 In an interview with us at Tehran International Book Fair, Carlo Giovanni Cereti, also the Italian Cultural Attaché to Tehran noted that he likes Iranian culture because it is a culture of moderation and a culture which mediates Asia and the Mediterranean Sea.
Cereti added that there is a very important international exhibition held in Milan called Serial Classic and it is an exhibition on classical arts. The idea is that in the ancient Greek and Roman world, what is a copy and what is a serial in classical arts. “We know that we have copies in the Roman time of art works of the classical antiquities.”
“Salvatore Settis, one of the most important art historians in the world, came to Iran and discovered a statue of Penelope in Persepolis sent from Greece to Persepolis before Alexander the Great. Then you see we have some copies of it in Rome three hundred years later,” he maintained.
“Thus Iran and the Mediterranean world were so much linked that we can have a statue from Athens found in Persepolis that was brought to Rome and copied there,” Cereti added.
The culture of Iran was a bridge between the Asia world and the Mediterranean Sea. In eastern Iran they have discovered ghanats and then ghanats were used in Milano, and then ghanats were constructed in Palermo and the Island of Sicily, according to the Italian Cultural Attaché to Tehran.
At TIBF and at Italy stand, the professor and his colleagues were exhibiting two encyclopedias published by the Treccani Institute of Italian Encyclopedia. “We are launching their books in Iran and we are active in Iran because of the agreement between the institute and Center for the Great Islamic Encyclopedia; this is the first year that we are exhibiting the books,” he said.
Treccani Institute publishes all kinds of work like dictionaries, history of science, books of art, history of philosophy, history of archeology as well as encyclopedias on Machiavelli, Petrarch and Dante in Iran. “We have two similar encyclopedias published in Iran; one is The Great Islamic Encyclopedia by Seyed Kazim Bojnordi and the other is ‘Daneshnameh’ by Gholam-Ali Haddad-Adel,” Cereti noted.
Treccani Institute of Italian Encyclopedia was founded in Rome in February 18, 1925 with the original intent of creating the first Encyclopedia and Biographical Dictionary of Italians, of which Italy was until then deprived. Over the past 90 years the activities of this institute has been synonymous with spread of knowledge.
Carlo Cereti also noted that Tehran International Book Fair is very similar to Turin International Book Fair since both have the same standards and they both sell books and are open to the public.
Turin International Book Fair is Italy's largest trade fair for books, held annually in mid-May in Turin, Italy. Founded in 1988, it is one of the most important ones in Europe, involving more than 1,400 exhibitors and 300,000 visitors by year.
Professor Carlo Cereti was born in Turin, Italy in February of 1960 where he received his initial schooling. Subsequently, he studied at the Istituto Universitario Orientale of Naples where in 1985, he obtained his Master’s (Laurea) degree in Oriental languages and civilizations focusing on Iranian and Indian Studies. In 1985, he obtained his Master’s degree in Oriental languages and civilizations focusing on Iranian and Indian Studies. In 1992, he received his Ph.D. in the same field.  From 1995, Carlo began teaching at the University of Rome "La Sapienza" where he presently holds the chair of Iranian Studies.
He has published extensively in Iranian Studies, mainly on Middle Persian and Zoroastrianism. His publications including ‘An 18th century Account of Parsi History’, ‘The Qesse-ye Zartoštiān-e Hendustān’ and ‘The Zand ī Wahman Yasn: A Zoroastrian Apocalypse’.